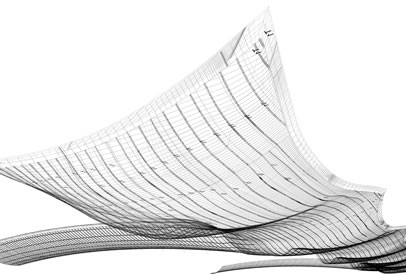 The façade of a building is the first and most of the time the only liaison between the observer and the architect. It’s the architect who defines the geometry of the envelope of the building, conceptualizes the façade and specifies the technical performance criteria. On the other hand it’s the façade system designer who interprets the architects’ conceptual design into a system of components which assures a sustainable façade during the whole life cycle of the building. 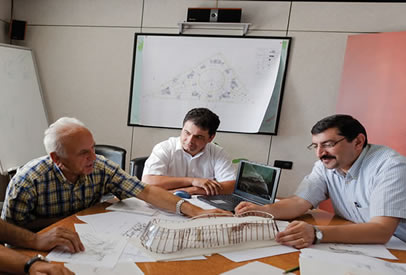 Like all design processes Façade System Design is the search of the best combination of the geometry, function and the construction of aluminum extrusions, gaskets, plastics, sealants and other components among a domain of almost infinitely many alternatives in order to reach defined performance criteria and norms. Design considerations range from the aesthetic and performance requirements of the architect to the manufacturing and installation requirements that must be anticipated by the system designer.

A good façade system is a design which is flexible enough to be applied in all parts of the building in terms of defined aesthetic and technical considerations such as structural, insulation, heat transfer, acoustics etc. and at the same time feasible to manufacture, easily erectable, and maintainable later. For each façade project an efficient design strategy is developed which takes into account the durability and sustainability of the façade during the life cycle of the façade starting from the designing stage to the demolition of the façade in the most economical life cycle cost.

The architectural trend in the recent years is to design unprecedented, unique and devastating façades which makes it impossible to use standard façade systems designed for general use. Also for international façade contractors due to different norms and various technical requests, a system designed for a particular country does not meet the requirements of a new project in another region even if it is a similar façade.

The core talent of Metal Yapı has been to design and develop architectural fenestration and façade systems to meet the architect’s innovative and complicated geometries linked with demanding technical requirements. Metal Yapı takes each project as a unique case and a challenge to innovate and improvement, and creates a specific customized façade system design taking into consideration the feasibility and (simplicity)easiness during all phases of the operation process. For Metal Yapı improvement does not only mean the design but the whole operation process. This knowhow of Metal Yapı can be traced back to 1960’s when founders of Metal Yapı designed and sold fenestration systems that they developed for their contracts. That company, named IAS (Istanbul Aluminum Systems) was one of the pioneers of System Houses in that decade when most of today’s existing European System Houses were not present.

Being the leading system designer and always the pioneer in almost all novelties in the façade technologies and combining the innovative design experience by contracting more than 1000 successfully completed projects gave a momentum to Metal Yapı to jump over to the most exigent international markets realizing most complicated façades and skylights which increased his ability to design according to almost all of the international norms.

Due to this recognition most of our new jobs (of which 95 % is export) are among the following type of façades ;

Design or Contract : An incoherent process

In today’s façade industry worldwide, the design process lacks cohesion as far as the implementation and application processes; i.e. manufacturing and installation are concerned. There are system houses on the one end who are designers and traders of material and on the other end there are façade and fenestration contractors who buy the system materials from the system houses and mostly named as applicators by the system houses, because they do not design the systems they use. Almost all of the façade contractors work this way because making new system design-every time in prestigious pro - ject- demands highly technical knowhow and experienced staff which can make R & D and P D (Product Development) as well as need of façade laboratories. So this lacking knowhow is tried to be supplied from system houses. The result is a disconnected process where the feedbacks from the application field are not linked organically with the designer. The designer is restricted only to theoretical experience which cannot pass beyond the laboratory testing where all the conditions are almost perfect and he makes the designs as if the system will be mounted in a sterilized laboratory atmosphere where the case on the job site at extreme weather conditions and hundreds meter high cannot be perceived. On the other hand the manufacturer and the installer of the contractor company lives all the difficulties of the design, is experienced on the innovative points to be remedied in a next project but all these are lost first in the façade company hierarchy pyramid and then between the façade contractor and the system design company and then again in the pyramid hierarchy of the system house company, and it is a pity to lose all these feedback.

Another disadvantage is the conflict of interest between the system house and the façade contractor. The aim of the system house is naturally to maximize his profit by selling more and thus designing more components, where the only aim is to guarantee that the system passes the tests in the laboratory conditions. The target is the simulated laboratory conditions, whereas the need for the client and the façade contractor is passing the real environmental conditions. In case of a failure on the site the conflict is augmented: it is the façade contractor who has not applied correctly whereas it is the designer who has not realistically designed. So the single source of responsibility rule is loosened and broken down.

Metal Yapı is one of the rare companies in the world which works in integrated processes starting with the custom design, testing, fabricating, installing and ending up with the maintenance of the façade until it is demolished. This single source responsibility gives the client upmost assurance of the good result. Each project for Metal Yapı is an opportunity to either improve its existing systems, or create a new system and innovate with the process of design, taking on-line feedback from each process and each department and involving each department into the design process. This leads to rethinking, reengineering, continuous design improvement and sustainable innovation and thus an exceptional knowhow. 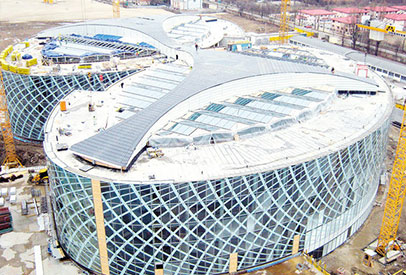 Our system design process is a multidisciplinary approach involving the system design department, engineering department, shop drawings department full time, and feedback design meetings are held frequently with the participation of the Manufacturing Coordinator, R&D Department, the Laboratory and of course the Project Management Team and the Site Chief. Thanks to use of the most advanced 3D modeling computer programs the design is verified easily by the design team and easily conveyed and communicated to the related departments. The designers are always guided by the engineering department with support of engineering calculations of any sort of façade physics issues according to the relevant norms of the country of the project. 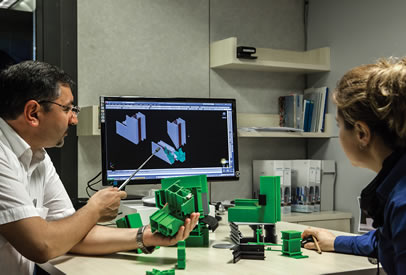 The second step after getting the approval of engineering and the related departments, a tangible prototype model is prepared in order to be sure of the ventilation and drainage channels, the links and the connection of the components including bolts and gaskets. Important segments of the design such as stack joint, the connection of vertical and horizontal elements, anchor condition or fittings is modeled thus allowing everyone involved in the design team to review the concepts. The hard plastic model can be drilled, tapped, sanded and painted to achieve appearances beyond the available colors. Our 3D prototype modeling machine which produces the sections and the components in high accuracy permits the control of the form, dimensions and functioning of the parts and the components which form the final system.

On the prototypes we can detect and prevent any design faults which could have been missed in 3D computer models. The plastic prototype is also very practical and efficient to highlight (indicate) the delicate points of the design to collaborating departments and also provides a very early stage handy mock-up to the architect and the client. 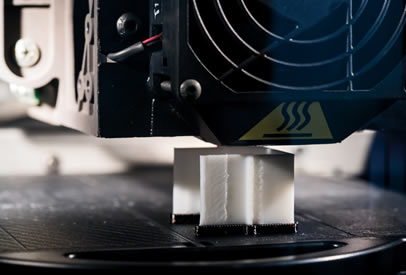 After the system design is approved the aluminum and gasket extrusion dies and components dies and molds are produced and a visual mock-up with original components, glass and infill materials is produced for general review of the client and the architect. This stage is also very utile for the manufacturing department to verify as a last review before the mass production of the materials starts. The last stage of the system design phase is the tests in the laboratory which is described in detail in the testing chapter of this book.